I designed this calendar after designing the Marvel and DC Calendars. I came across the center gun barrel design and thought it would make for a cool centerpiece of a new calendar, this time with a James Bond theme. If you like the design follow me on Instagram to see my recent work!

I spent over 45 hours adding content and redrawing everything to make the designs my own rendition and to make them routable. I used Vectric Aspire to draw everything and then convert it to G-Code to route. This calendar design took only one design attempt as I have done several of them now. What shall I do next?

Baltic Birch layed up with Formica brand whiteboard, dyed with clothing dye and then wiped clean on the surface


A James Bond “calendar”, inspired by my previous two calendars, Marvel and DC based. 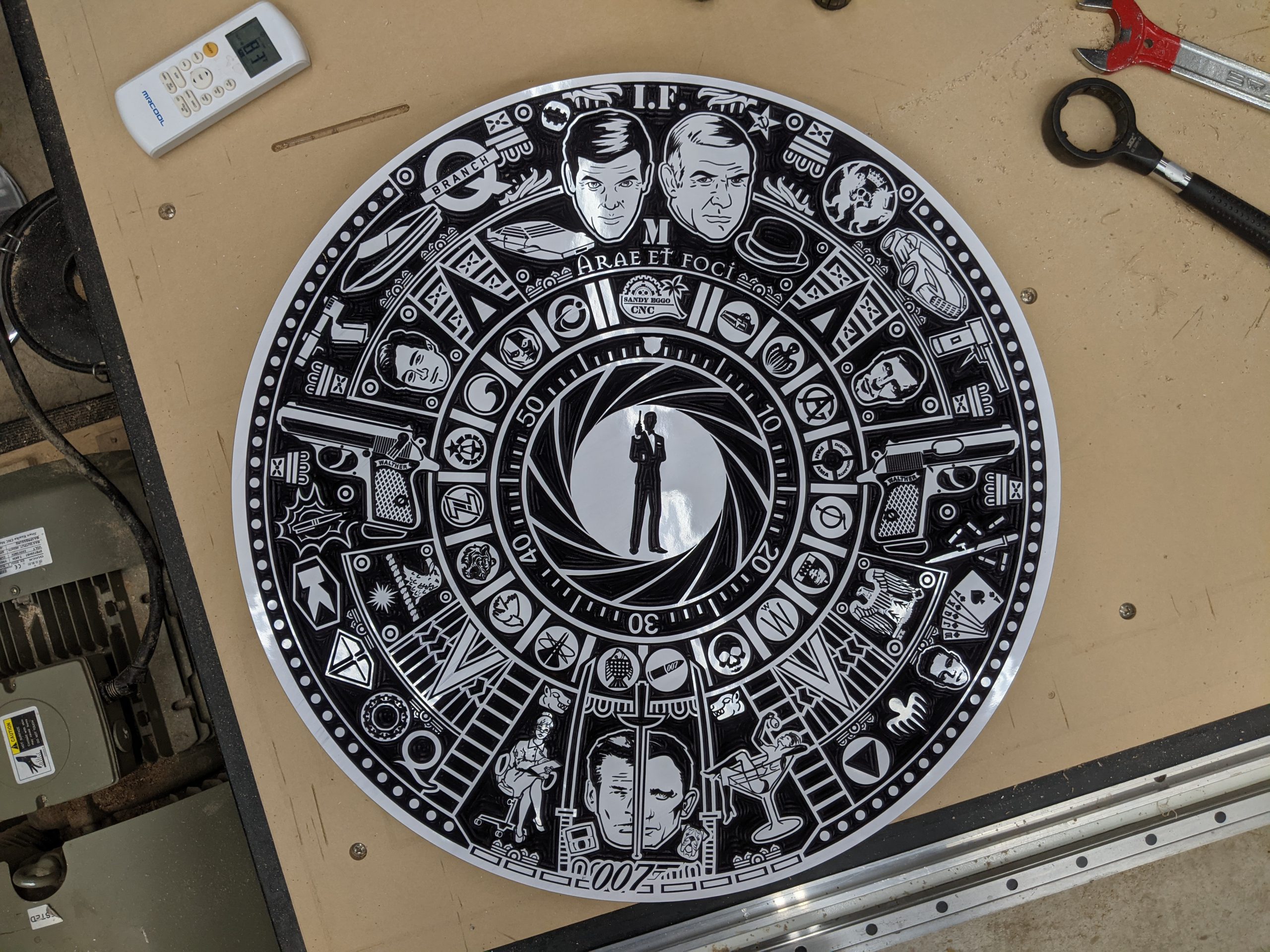 Creative Commons release: No one has the rights to sell the physical or digital version of this or it’s likeness, not even me. This was created and released to inspire creativity in the maker community.

This work is licensed under a Creative Commons Attribution + Noncommercial + ShareAlike 4.0 International License

What does this mean?

At the center is the gun barrel featured at the beginning of almost all Bond movies. That is what inspired me to make this design. The ring outside of it is an Omega Seamaster bezel. Next is a ring of symbols for each of the primary Bond villains, one per movie. Up top is my company logo, Sandy Eggo CNC, proceeding clockwise are Dr. No, From Russia with Love, Goldfinger, Thunderball, You Only Live Twice, On Her Majesty’s Secret Service, Diamonds are Forever, Live and Let Die, The Man with the Golden Gun, The Spy Who Loved Me, Moonraker, For Your Eyes Only, Octopussy, A View to a Kill, The Living Daylights, License to Kill, Golden Eye, and Tomorrow Never Dies.

Then in the lower left corner I kept them going with The World Is Not Enough, Die Another Day, Casino Royale and Quantum of Solace. Last I jumped to the lower right and fished them off with Skyfall, Spectre and No Time to Die. For symmetry sake I was left with a single spot and threw a deck of cards in there for the next Bond after Daniel Craig.

Starting up top and working clockwise I placed Q Branch, Wet Nellie (underwater car), Jaws’ teeth, I.F. for Ian Fleming, M for “M”, Arae Et Foci for Blofeld since he is in so many Bond movies, a hammer / sickle and star for Russia, Oddjob’s hat, SMS (MI6) logo, an Aston Martin DB5, Scaramanga’s gun, Bond’s Walter PPK, a pen gun, The NSA logo, a girl in a martini glass to symbolize the many Bond girls and a English Bulldog with Daniel Craig.

Two swords and a fencing foil separate the two lower Bonds. On the other side at the bottom I start with the Ericsson phone Pierce used to control a BMW, Moneypenny, the CIA logo, an exploding pen, the other side of a PPK, the shark gun and the boat that jumped the road in Live and Let Die.

For the bond characters, Roger Moore is up top left of center with Sean Connery to his right, then clockwise is George Lazenby, Daniel Craig, Pierce Brosnan and last is Timothy Dalton.

The remaining elements are from the Aztec Calendar.

When you're ready to start your project, so are we...